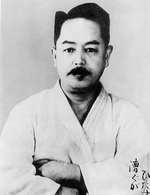 The founder (Ryuso) of karate-do Shito-ryu, Kenwa Mabuni was born on November 14, 1889 in Shuri, Okinawa. He belonged to the 17th generation from one of the bravest warriors of Ryukyu kingdom Kenio Oshiro. Kenwa Mabuni himself was a physically weak child; however, his family members often told him stories about his famous ancestors and he dreamed of becoming physically controlling. At the age of 13, Kenwa was accepted as a student at the school of the famous karate-do master Anko Itosu, who lived in Shuri. Kenwa Mabuni trained every day, even during typhoons, and within seven years he learned the art of Shuri-karate or Shuri-te.

When Kenwa was 20 years old, he began to study the art of Naha-karate or Naha-te with the Grandmaster Kanryo Higaonna. Later both of these major directions of karate-do of Okinawa formed a basis for Shito-ryu karate-do style created by Kenwa Mabuni.

After graduating high school and and being discharged from the army Kenwa Mabuni worked in the police for about 10 years. His job required him to visit different parts of the country and he had an opportunity to study other forms of karate-do with little-known local masters. He also studied the ancient art of Ryokan Budo.

The beginning of the 20th century has become a period of a wide spread of Karate-Do. In 1910 it was included in the school program as a separate subject, which meant the official recognition of Karate-Do. But the Karate-Do education still lacked the system. The majority of masters paid most attention to the physical training of body, wrists, elbows and fingers, using Makiwara and sandbags. There was no standard karate-do uniform, as it exists now.

During these years Kenwa Mabuni began his teaching activity. Together with his master, Mabuni created school of Karate-Do for the study of this martial art. On February 13, 1918 his senior son Kenei was born. The same year Kenwa Mabuni started to popularize Karate-Do and many well-known masters helped him. He organized meetings in his house which were attended by Gichin Funakoshi, Choju Oshiro, Choshin Chibana, ?nbun Tokuda, Shimpan Shiroma, Seicho Tokuumura and Hoko Ishikawa. Besides, in 1918 he had the honor to demonstrate Karate-Do at the Okinawa Middle School in the presence of Prince Kuni and Prince Kacho.

In 1924 Kenwa Mabuni became the Karate-Do instructor in two schools and received the honor to demonstrate the Art for Prince Titibu.

At this time instructors concentrated on physical training and kumite practice. When a student asked the teacher to explain something, the teacher gave him an opportunity to attack him and answered by demonstrating various defense techniques. The training was just a continuous practicing of the same techniques. All masters had varying techniques but the main teaching method was the same - practical trainings.

...The year of 1927 was extremely important for Kenwa Mabuni. He met Jigoro Kano, the founder of modern Judo, who arrived Okinawa to open a new judo dojo. Chojun Miyagi and Kenwa Mabuni had an opportunity to demonstrate and to explain Jigoro Kano the techniques of Karate-Do. Jigoro Kano was inspired by Karate-Do and considered it the ideal Budo art for both defense and attack. He talked about the necessity of wide spread of Karate-Do in Japan. Being touched by these inspiration words decided to move to Osaka and to devote himself to development and popularization of karate-do Shito-ryu in Japan.

As Karate-Do was an original Okinawan Art, Kenwa Mabuni faced a wrong perception of Karate-Do when he moved in Osaka. There were no public training dojo and Kenwa tried to popularize Karate-Do in police departments and Buddhist temples. Mass audience had some difficulty accepting Karate-Do, especially Katas and frequently called it "fists dance". Kenwa Mabuni worked days and nights, trying to invent ways of popularizing Karate-Do. He even practiced Tame shivari - the breaking of bricks and boards, showing public the force of the new martial art. Karate-Do was sometimes used during usual fights, which contradicted to its ideology and reputation. Police also tried to oppose Karate-Do since there were cases when criminals was wounded during arrest.

Despite all difficulties, Kenwa Mabuni remained on his elected way. His titanic efforts finally succeeded, and as a result the organization called Dai-Nihon Karate-Do Kai was created in 1931. Subsequently this organization was renamed into Nihon Karate-do Kai and became the predecessor of the modern Shito-kai. Many of the participating members of the Dai-Nihon Karate-Do Kai were direct students of Kenwa Mabuni. Today they form the kernel of Shito-kai in Japanese Karate-Do Federation and continue to transfer the martial art of Kenwa Mabuni to their students.

After World War II Karate-Do clubs began opening one after another in schools and universities. They organized tournaments and prepared the National championship of Japan. During difficult post-war years Mabuni helped to reconstruct Japan by devoting himself to the development and wide spread of Shito-ryu Karate-Do. Unfortunately he had no time to bring his plans to life since he died on May 23, 1952.

The Shito-ryu Karate-Do, created by Kenwa Mabuni, combined thefeatures of Shuri karate of Master Itosu and Naha karate of Master Higaonna. The name Shito-ryu is formed from the first hieroglyphs of names of these Masters ("Ito" - old Chinese hieroglyph "Shi", "Higa" - old Chinese hieroglyph To). While teaching his students and explaining the basic differences between schools Itosu and Higaonna, Kenwa Mabuni paid the most attention to Katas. He believed that Katas, which combine both attack and defense techniques, are the most important part of karate-Do, and that it is necessary to understand the meaning of each movement in the Kata and to perform the Kata correctly. Kenwa Mabuni was the first to introduce the concept of Bunkai kumite and Hokei Kumite, which demonstrated the purpose and showed the correct use for each Kata The final result of proper Kata and Kumite training is the ability to apply karate-do techniques in free Kumite. Practice of Kata also helps to transmit the knowledge encoded in Kata to the subsequent generation. Karate-Do Shito-ryu, unlike other karate-do styles, has much more Katas.

According to Kenwa Mabuni the student, ignoring Kata and practicing only Kumite, will never progress in Karate-Do and will never understand its meaning.

The Center of Nihon Karate-do Kai was Kansai-area. Due to the efforts of Manzo Iwata (one of the best students of Kenwa Mabuni and future chairman of Japanese Shito-kai Karate-do Federation) the Eastern branch, centered in Tokyo, was organized in November 1960. In the same year the founder's son Kenei Mabuni organized Western branch centered in Osaka. Both clubs have held independent championships until 1964, when the first joint Karate-Do Shito-Kai championship took place. In October of the same year the Japan Karate-do Federation was formed. In February 1973 the Western and Eastern branches of Nihon karate-Do merged, leading to the formation of the Japan Karate-do Federation of Shito-Kai.

Karate-Do Shito-Kai school started international activity. Karate-Do masters were sent to Asia, Latin America, U.S.A. and Europe. Official representatives from different countries gathered in Mexico City in November 1990 to discuss the development of Karate-Do in the world and the creation of International Karate-Do Shito-ryu federation. The same issue was simultaneously discussed in Havana during the first Pan-American karate-do Shito-kai championship. And finally, on March 19, 1993, the World Shito-ryu Karate-do Federation with the center in Tokyo was established, with Manzo Iwata as its president. Official representatives of 28 countries took part in the first karate-do Shito-Ryu World Championship.